Spearheading the ground forces of Market Garden, XXX-corps paved the way north towards Arnhem. On the left flank supported by XII-corps and on the right flank VIII-corps. The troops on the flanks of XXX-corps had the assignment to protect and widen the corridor so that XXX-corps could concentrate on getting to Arnhem, relieving the 1st Airborne Division paratroopers.

As a part of XII-corps, troops from the 15th Scottish Division ended up in the Best area. The troops crossed the border, arrived in Eindhoven on September 21st and continued traveling north towards Best via the Boschdijk. The 2nd Glasgow Highlanders led by Lt-Col. P. Hunt and the 7th Seaforth Highlanders led by Lt-Col. P.U. Campbell arrived at the remains of the Best bridge just after noon. The units were sent forward to assess the situation in Best. They were supposed to see a bridge that was still intact and to meet up with the American paratroopers of the 502nd Parachute Infantry Regiment. But the bridge was destroyed and the Americans were nowhere to be seen.

Night patrols of the 7th Seaforth Highlanders reported that there was no enemy activity in the center of Best. High command concluded that the Germans must have left the area and retreated further north. The commander ordered his troops to enter the center of Best on the morning of September 22 and set up positions there. D Coy of the 7th Seaforth Highlanders were assigned with this task. With the idea of this being an easy task, D coy moved towards Best.

The same day, the 2nd Glasgow Highlanders attempted another attack on the center of town but they were shot to pieces.

The Germans set up a frontline following the railroad tracks from the canal all the way up north towards the railroad crossing. They also used the brick factory just east of the railroad tracks and converted it into a fortress. The buildings in town were turned into small fortresses with Germans creating killzones on the fields between the town and the Scots at the canal. When the attack started A Coy was pinned down almost immideately and B Coy, who made more progress, swung east and took over the attack of A Coy. B Coy bumped into the brick factory and met heavy opposition. D Coy was sent towards the orignal goal of B coy, the church and monastary. C coy got stuck 200 yards from the crossroads, involved in heavy house to house fighting with the Germans. It was difficult for the Scots to clear the houses. They weren’t able to use grenades because civilians were still in the combat zone. The 2nd Glasgow Highlanders experienced the strong German resistance in town and paid a heavy price. The Germans raged havoc among the Scottish troops. The Scots only option was to dig in and stay put. After a hard battle only D Coy had been able to reach their goal in the town center.

The Germans were playing hard to get at Best. First the American paratroopers encountered heavy enemy resistance, now the Scots were having a hard time. It is strange to see that the American and British troops weren’t up to date on the situation. If the Scots knew what was waiting for them in Best, the attack might have had a better/different ending.

Because of the heavy German resistance in Best, XII-corps wasn’t able to push further north. That is why the German forces at Boxtel, Schijndel, Eerde and Veghel were still able to put pressure on the corridor. German forces still held certain parts of the corridor at Sint-Oedenrode (de Coevering) and north of Veghel.

On September 22nd the Royal Engineers started building a better and bigger bridge over the canal at Best. They build a “class 40” bridge, better known as a Bailey bridge, over the remnants of the roadbridge. Just east of the remains of the class 40 bridge, the engineers build class 9 bridge, which is smaller pontoon bridge.

Brigadier General Villiers decided to attack Best once again. Now using three battalions to force an opening in the German defenses. Again the Seaforth and Glasgow Highlanders lead the attack, bashing into the German defenses at the railroad tracks and the brick factory. German defenses held up inflicting great damage in the ranks of the Scottish battalions.

The Seaforth and Glasgow Highlanders were able to maintain positions in the center of Best. The 6th Kings Own Scottish Borderers were also sent to Best and set up positions on the crossroad on the Eindhoven-Boxtel highway. The 6th Royal Scots Fusiliers set up positions just north-east of the Best, in an area called ‘De Vleut’, preventing the Germans from breaching an opening in the corridor between Sint-Oedenrode and Son. At the end of September 23th, the Scots had four battalions dug in at Best, with a total capacity of 4000 men.

The fighting continued on Sunday the 24th of September. The 9th Cameronians joined the battle at Best. Main focus of the attacks was still the brick factory at the railroad tracks. An awkward scene took place in a factory building (clog factory) close to the brick factory. Two platoons of B Coy 2nd Glasgow Highlanders had been able to capture the building on the 23th and spent the night in the building. At dawn, the Germans had been able to get close to the building, discovered the Scottish troops inside and with grenades and rifle fire they wiped out both platoons. 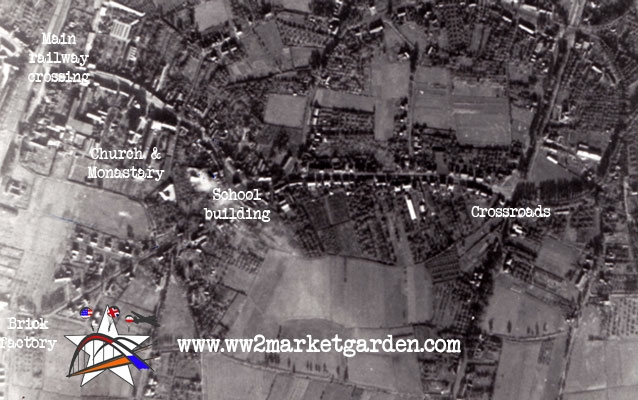 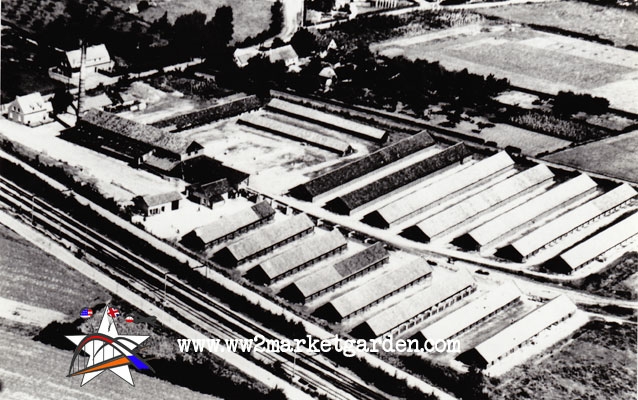 One of four targets for the Scottish division: the brick factory at the railroad tracks. 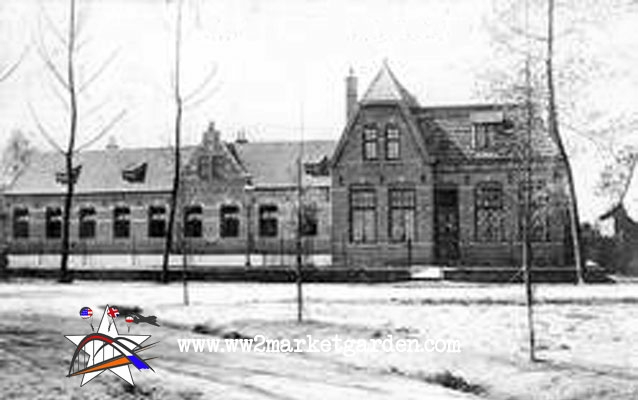 One of four targets for the Scottish division:  The school building in the center of town. 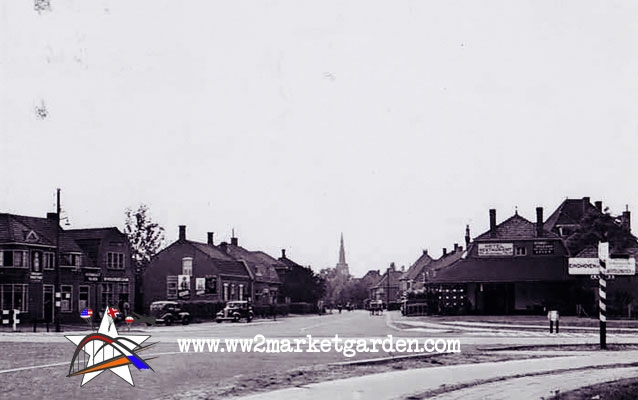 One of four targets for the Scottish division: The crossroads on the Eindhoven-Boxtel highway looking east into town center. 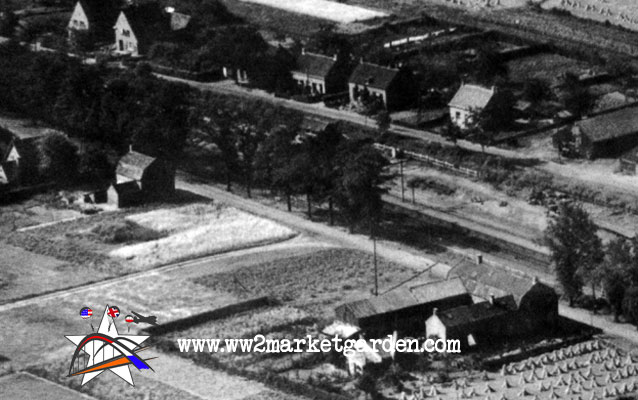 Photo: The building in the bottom right of this picture is the clog factory located at the railroad tracks. This is the spot where two platoons of B coy were massacred by the Germans. The gap in the line was utilized by the Germans to push forces through the Scottish lines towards the center of town.

The 6th Royal Scots Fusiliers had been able to make contact with the American paratroopers of the 502nd Parachute Infantry Regiment. At last contact had been made. The next day, the battle at Best continued. Another unit was put into action at Best. The 2nd Gordon Highlanders, led by lieutenant colonel Sinclair, attacked from the positions that the 2nd Seaforth Highlanders had set up. Just minutes after the attack started, the Gordon Highlanders experienced what the battle at Best was like. Even though so many troops were active in and around Best, the Germans were still able to hold the brick factory. With thick brick walls the factory was a fortress, which seemed to be invincible. Again, the Scots lost a lot of men. Although it is difficult to express the losses in an exact number, the Scots lost 40+ men during the attack. Later that day, Typhoon fighter planes were used to fire rockets on top of the German positions at the railroad tracks and the brick factory, but with no effect.

After four days of intense fighting with infantry, Brigadier General Villiers was allowed to use the artillery of the 15th Scottish Division. Seventy-two guns were set up and fired towards the German positions at the brick factory. The guns pounded German positions and barrage after barrage hit the factory. It had the desired effect. Units of the 2nd Seaforth Highlanders were able to capture the brick factory with the Germans pulling back behind the railroad tracks. The commander of the 15th Scottish Division, General Major Colin Muir Barber, received the news of the capture of Best on the 26th of September. No German activity was spotted between the center of Best and the canal, but the Germans still held up positions west of the railroad crossing and north of Best. The Scots maintained the line in between Best and Sint-Oedenrode, so the corridor was safe. Even though Best was captured, the situation didn’t change until October 24th. For a month, the status quo between the Scottish and the German troops was maintained, but during the campaign at Best, the Scottish paid a high price. With hundreds of dead and wounded, the Battle at Best proved to be a tough battle.

On 24th of October, the troops at Best got new reinforcements. Added to the already existing troops at Best were the 6th Guards Tank Brigade and the Tank Grenadier Guards. With operation Pheasant starting, the troops in Best were ordered to push north-west towards Tilburg. After reconnaissance, the Scots were surprised that there were no German troops north and west of Best. On the 24th, the troops crossed the railroad tracks, encountering no enemy opposition. The village which was fought over so hard, was now a ghost town. All the villagers were evacuated, Germans troops left the scene and the Scots pushed on. With Best, a village left in ruins. 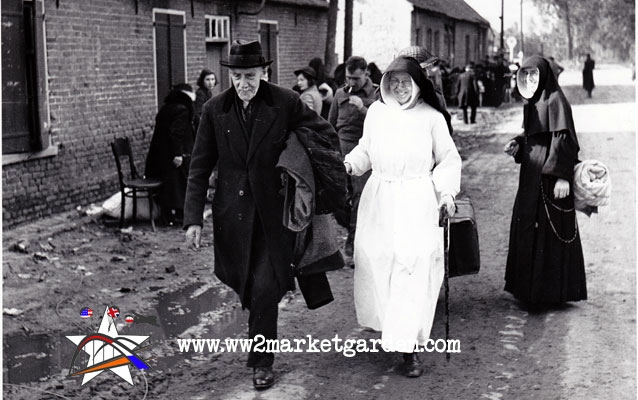 The Germans had evacuated a part of Best on September 20. The rest of Best was evacuated by the 15 Scottish Divisionon September 28. Pictures taken at the crossroads on the Eindhoven-Boxtel highway. 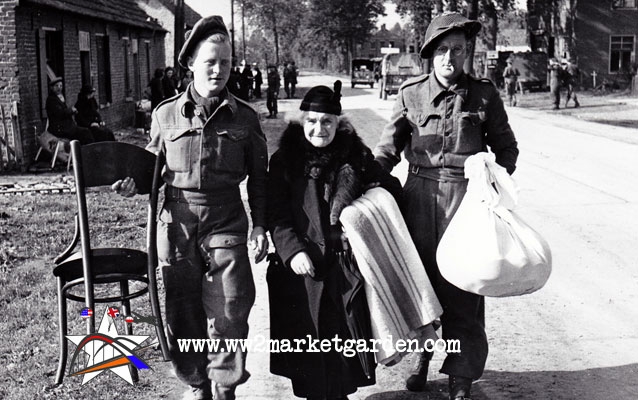 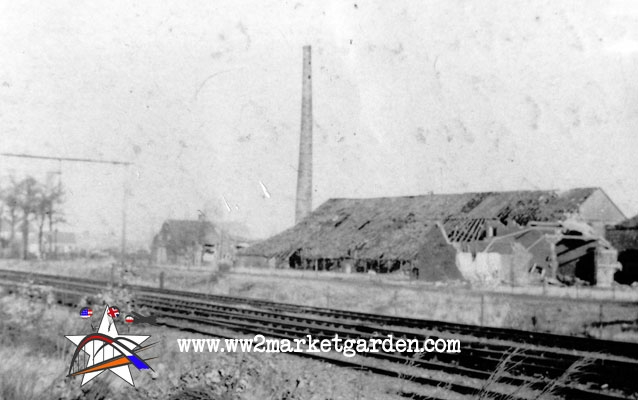 The brick factory after the battle. 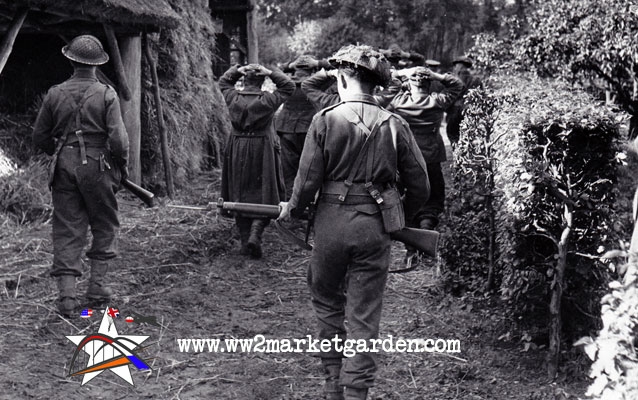 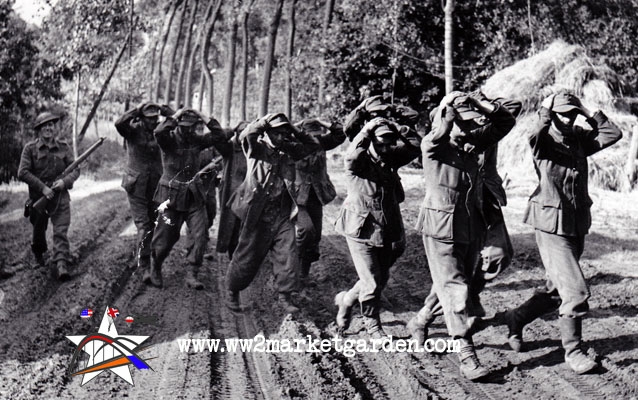 Video: footage of the 15th Scottish Division in Best on their way to Oirschot, participating in Operation Pheasant. 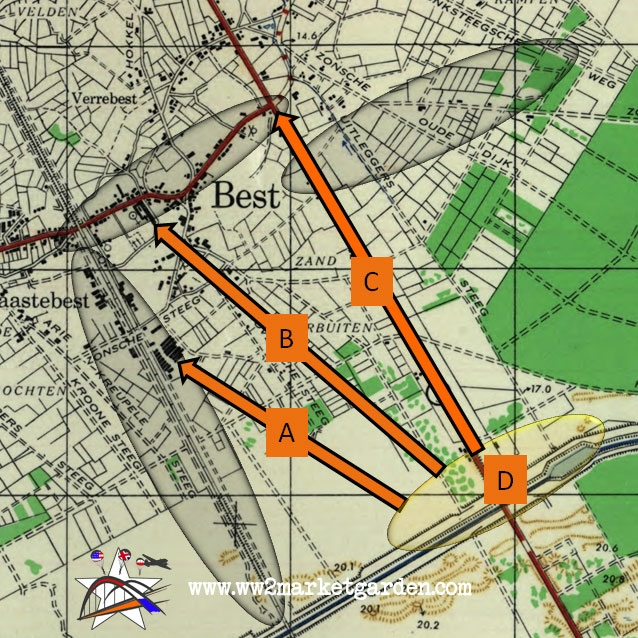 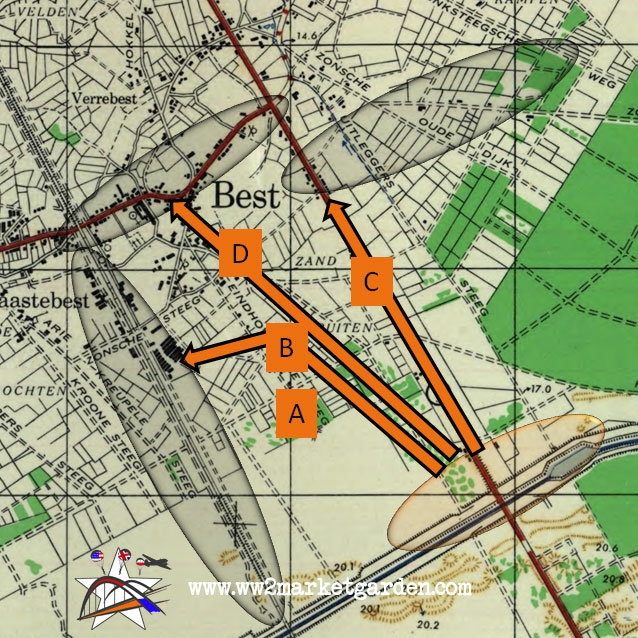 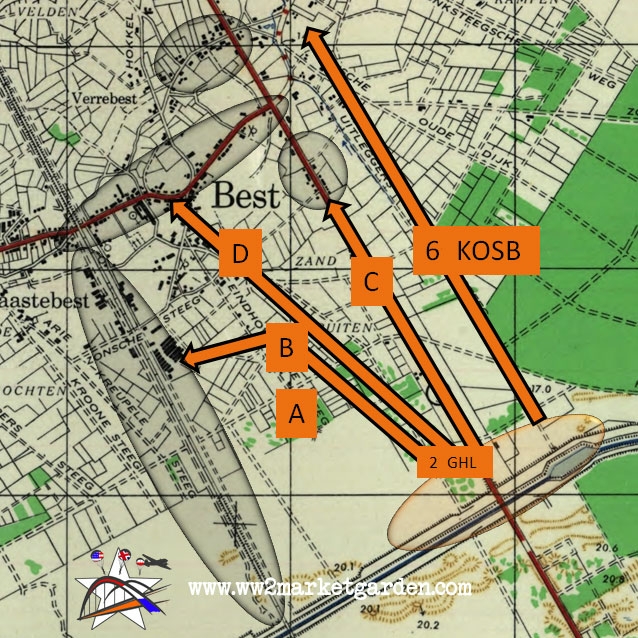 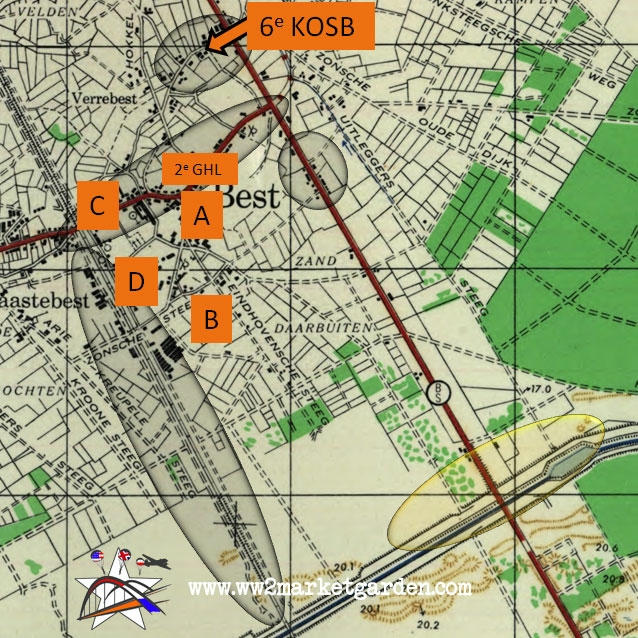 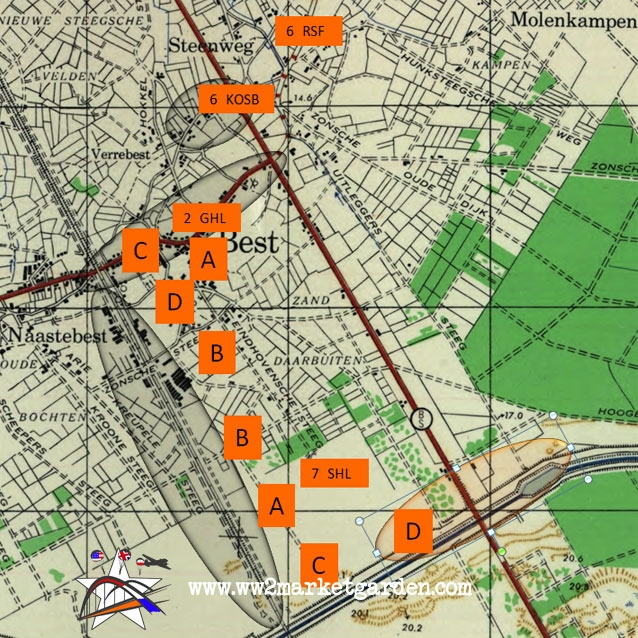 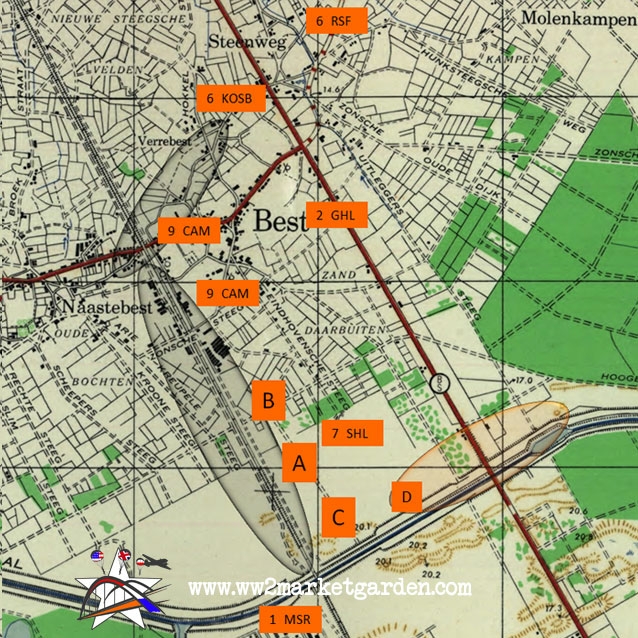 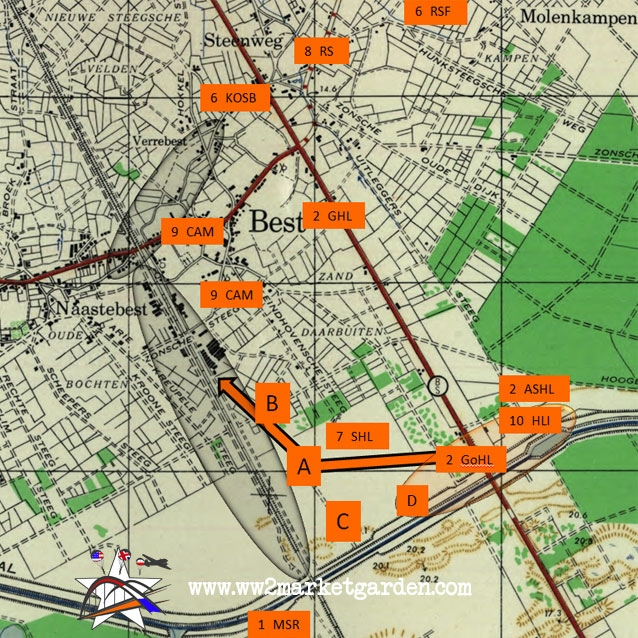 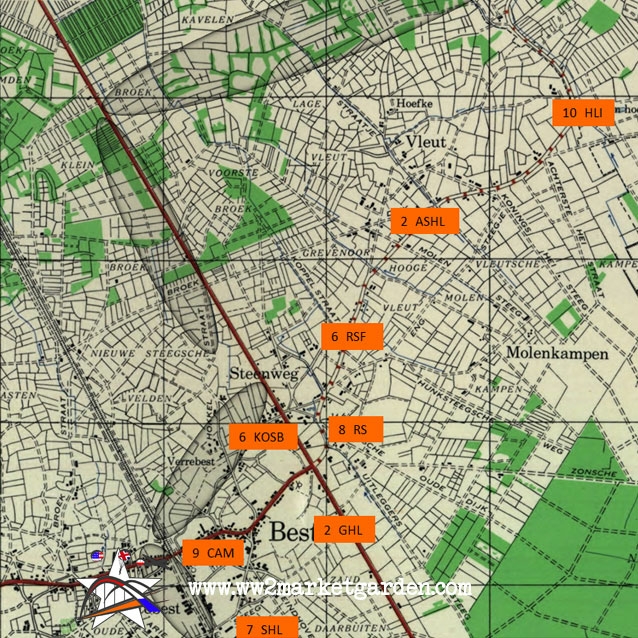 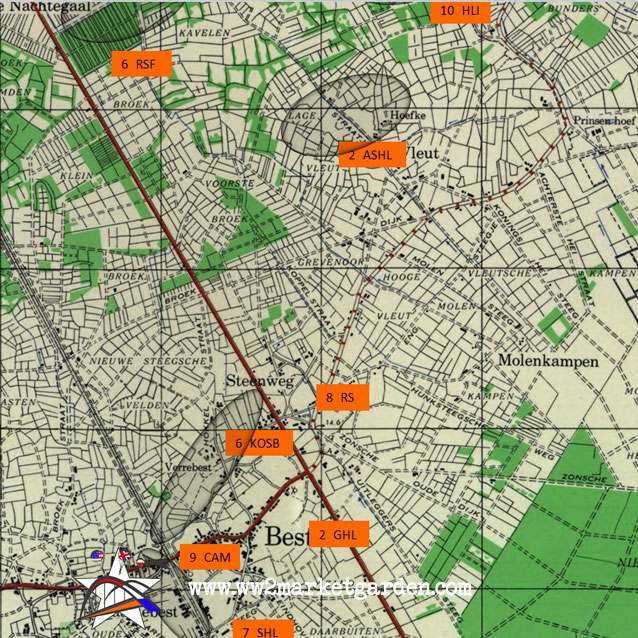