PHOTOGRAPH OF THE MONTH 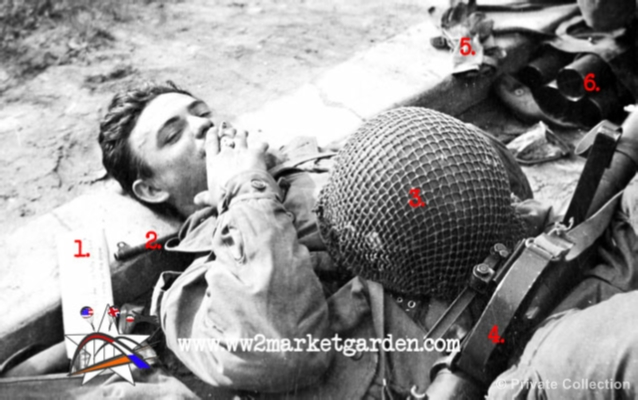 The picture above was taken in Eindhoven on September 18 1944, on D+1 of ‘Operation Market Garden’. It shows us a paratrooper from the 101st Airborne Division taking a (smoke) break after the unit’s advance through the town. This picture was probably taken close to the ‘Van Abbe’ museum on ‘De Wal’ close to one of the Dommel river bridges. The picture shows us a couple of nice things:

Members of the 82nd Airborne Division getting some last supplies before they start to board their airplanes for ‘Operation Market Garden’. The trooper on the left is holding an empty  No. 82 British ‘Gammon’ handgrenade (1) in his left hand in his right hand he’s holding the explosive type composition C-2 block (2). The trooper sitting on a crate, which is filled with D-rations (3), fills up the fuze house of a Gammon grenade with a detonator. The trooper is wearing an entrenching tool (4) on his belt.

They are wearing the small lightweight cotton gauze fabric 48 star ‘invasion’ armflag (6) on their newly supplied M-43 uniform. These small armflags were typically  used by the 82nd airborne.

Maps of the landing area (7) are stacked up under the crate and are handed out soon. 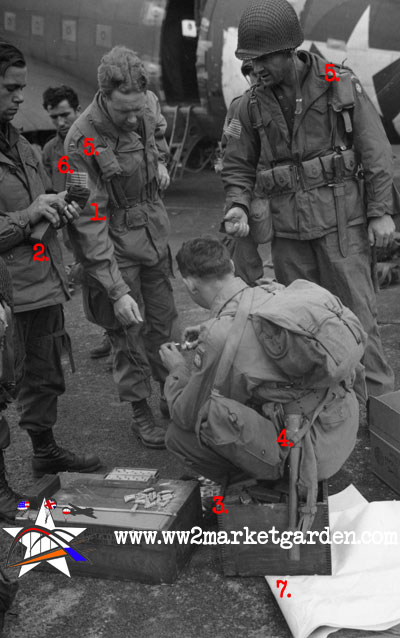 The picture above is taken in Aalst, a village in between Valkenswaard and Eindhoven. The picture shows us a local who is handing out a cigar to a British soldier that is passing through his village. The vehicle on the picture is a British Universal carrier or ‘Bren carrier’. The information on the vehicle provides us with some information about the unit that the carrier belongs to. 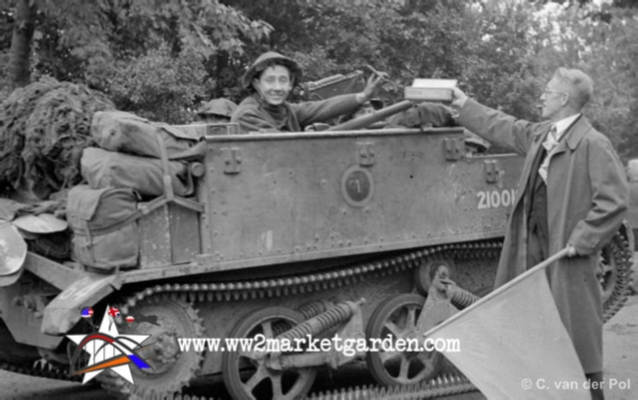 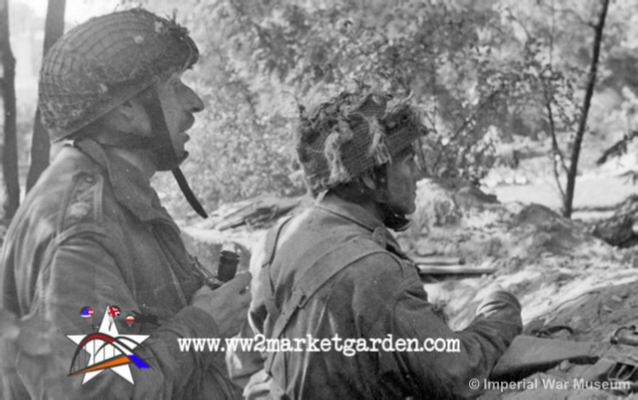 The Army Film and Photographic Unit (AFPU) of the British 1st Airborne Division took several epic pictures that can be seen in almost every book about Operation Market Garden. One of the pictures we do not see much is this picture of two men from the 1st Battalion The Border Regiment.

Major Neill was wounded four times on September 23 during a concerted enemy attack but was able to hold the line at Oosterbeek. Both men survived the battle and were evacuated across the Lower Rhine when the division withdrew.

The picture above was taken on September 18 1944 in Eindhoven. The pictures shows us paratroopers of the 101st Airborne Division with German prisoners of war on top of the Dommel bridge (one of the four bridges the 101st had to secure) on ‘De Wal’, right in front of the Van Abbe museum. The guard on the left (1) is making sure the prisoners stay down on the ground, he has placed a rifle grenade on his rifle. We are able to spot at least six PAN members (2), sporting the blue coverall, helmet and PAN brassard. On this picture we see the commander of F company 506 Parachute Infantry Regiment, 1st Lieutenant Thomas A. Rhodes (3), probably making all these troopers members of F company. The German prisoners of war (4) were captured by members of PAN and on the picture we see the members of PAN transferring the POW’s to the men from F company.

PAN ('Partizanen Actie Nederland' or translated 'Partisan Action Netherlands')was a resistance movement which mainly operated in the Eindhoven area. PAN is founded by Adrianus Petrus Hoyck-van Papendrecht in 1943. PAN was a fairly small resistance organisation with around 100 people activily involved in the movement. The resistance group was mainly involved in undertaking sabotage actions against the Germans and hiding downed allied airmen from the Germans. When in September 1944 Operation Market Garden took place and the 101st Airborne Division liberated Eindhoven, the men and women of the resistance group surfaced and helped the liberators with several tasks. They provided intelligence reports of German troop movements and the status of the advance of the Irish Guards and they also helped with the processing of German prisoners of war.

On this picture we see a captured German Kübelwagen converted to a PAN vehicle. The picture shows us the PAN brassard, which was worn around the left arm, being used as a new license plate (1). The PAN member on the right side on the hood of the car (2) is sporting a U.S. helmet with an NCO bar on it. He is wearing the helmet backwards. He also carries a M1 rifle, a bandoleer with ammo, U.S. combat boots and a flash light. This heavily armed group has two German MG10 machine guns (3) which might be retrieved from a German bomber. (4) The guy in the left back of the car is dressed as a typical Dutch PAN resistance movement member, wearing the blue coverall and a Dutch military helmet (the M34). 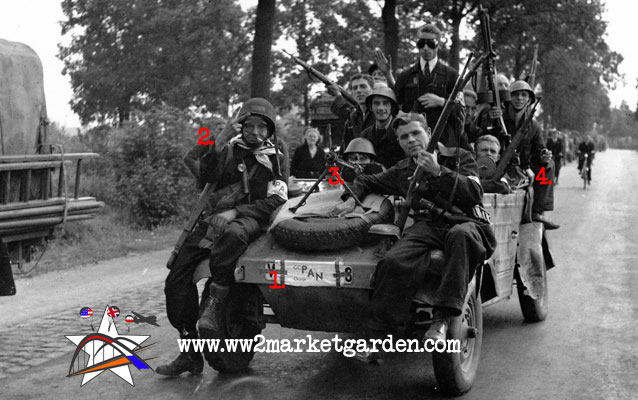 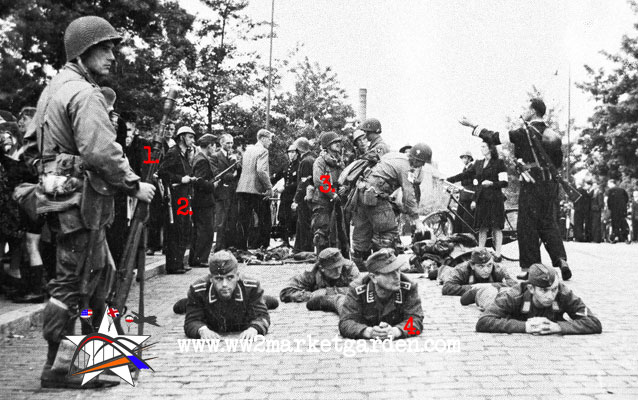 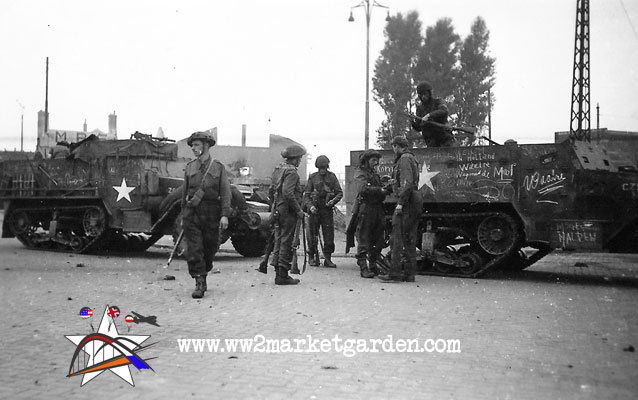 An airborne operation can only be succesful when the resupply of the freshly dropped and airlanded troops takes place as soon as possible. For Operation Market Garden airplanes from the RAF and USAAF participated in resupply runs. Here we can see a formation of B-24 ‘Liberator’ bombers that fly over the main road leading up towards Nijmegen at Grave, the Netherlands. This picture is taken on September 18 when a massive resupply drop was organised at Son, Overasselt, Groesbeek and Oosterbeek. These airplanes are heading for their resupply drop at Overasselt. 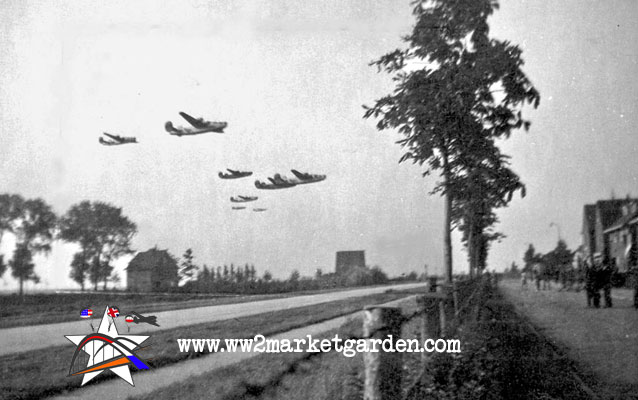 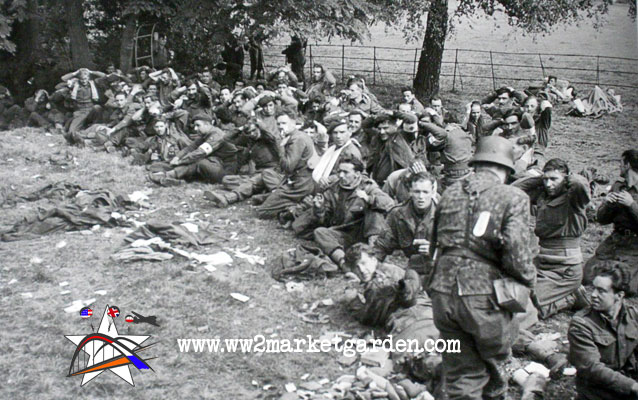