I was born in the summer of 1982 just north of Eindhoven in a small town called Best. My interest in WW2 history ignited at a young age. When I was young, like most boys I liked guns, tanks and playing with toy soldiers. Growing older I listened to the stories that my grandparents told me about the war. One of those stories was the story of Joe E. Mann. A soldier from the 101st Airborne Division who sacrificed himself to save his brothers in arms. That story got stuck in my head somehow and I wanted to learn more about the men who fought and died in my village. That interest evolved into my first online project: www.battleatbest.com. A website about the Battle at Best.

Over time I extended my interest in world war 2 and became involved with foundation Remember September 1944. During the year I visit a lot of events to remember those valiant men and women who participated in the liberation of Europe. I hope with telling some of their stories, people will continue to remember these brave people. Lest we forget!

I was born in the winter of 1980 and just like Tom I live in Best. My interest in WW2 started when I was just a kid. My father was involved with the “Brabants Airborne museum” and therefore knew a lot of American and Scottish veterans that had something to do with the liberation of the area I live in. I met these veterans, shook their hands and heard their stories. My interest in their stories grew bigger and bigger. My first online project was www.uscemeteryson.nl, a website about the U.S. war cemetery at Wolfswinkel in Son, the Netherlands. Not much was known about this cemetery, where many American, British and German soldiers were buried. Eventually I placed a monument at the cemetery’s site together with friends.

I became involved with the foundation Remember September 1944. There I met Hans, a Airborne Troop Carrier enthusiast. Together with Hans I visit the glider pilot reunions in the U.S. and with my buddies from the foundation I like visiting WW2 commemorations througout the year. 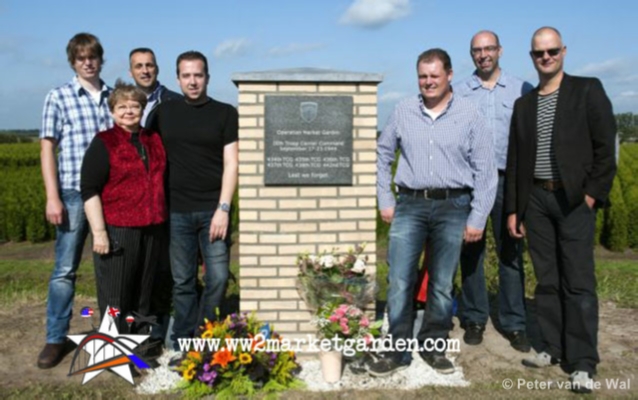 The monument on the picture was placed in the middle of drop-and landingzone in Son, the Netherlands by Foundation Remember September 1944 in honor of IXth Troop Carrier Command.