The American 12th Army Group advanced on the right flank of the British 21st Army Group. The Americans advanced from the Seine towards the Belgian-German and French-German border and were about to bash into the defenses of the German 'Siegfriedline', a defensive line starting at the German-Swiss border leading all the way up north alongside the German border, stopping just over the border with the Netherlands east of Nijmegen. The Siegfriedline consisted of a patchwork of complex defensive measures: bunkers, pillboxes, tank traps, barbed wire, trenches. Designed to inflict maximum casualties to anyone threatening the line, with a minimum amount of manpower.

One of the most important goals for the Allies was the capture of a big harbor. Supply lines were stretched to the limit, with the armies still receiving supplies from the beaches in Normandy, France. On 4 September British forces of the 11th Armoured Division captured the city of Antwerp, but this didn't give the Allies the harbor they needed. The harbor of Antwerp was reached by ships through the Scheldt estuary. The Germans still had a firm grip on the northern side of the Scheldt estuary and could hit any ship trying to get to the Antwerp harbor. The Canadians were tasked with clearing the Scheldt estuary.


The troops of British Second Army were having a hard time gaining ground on the Germans after the capture of Brussels and Antwerp. With VIII Corps being left behind at the Seine, only a couple of fighting units were fighting on the frontline. The 11th Armoured Division moved out from Antwerp to capture a small bridgehead over the Meuse-Escaut canal on 6 September, but they were soon pushed back by the Germans. The Guards Armoured Division had succesfully gained a bridgehead so the 11th Armoured Division was moved to the right of the division to protect its flank. Hereby leaving the 50th Northumbrian Division at Gheel to capture a bridgehead.  XXX Corps waited for new supplies to reach the division and consolidated the frontline as it was on 10 September.


Tuesday 5 September was an important day for the Dutch. Many German troops crossed the border into the country retreating towards Germany. The Dutch population was exited, they later renamed the day, calling it 'Mad Tuesday'. The Germans were retreating in large groups, utilizing every vehicle to get back to Germany. How long would it take for the Allied armies to cross the border and kick the Germans out of their beloved country. Their joy didn't last for a long time. With the Allied advance stopped by their own supply line at the border with the Netherlands, the Dutch had to wait. This gave the Germans the opportunity to regroup and form a new defensive line alongside the Meuse-Escaut canal, concentrating on the major cities on the northern side of the canal and the important road junctions. The Germans weren't defeated yet and were now ready to withstand a new allied attack. The allied forces were in dying need of a plan to break the stalemate on the Western front.

Map legend: The dark grey area is territory already captured or ‘liberated’ by the allied forces. The sector is devided in two groups, the left side is the British sector, the right side is the American sector. The red line is the frontline as it was on 11 September 1944. The orange line is the Siegfriedline, the defensive network from the Swiss border running up north towards the ‘Reichswald’ just east of Nijmegen. In beige we see the Netherlands, where ‘Operation Market Garden’ would take place. 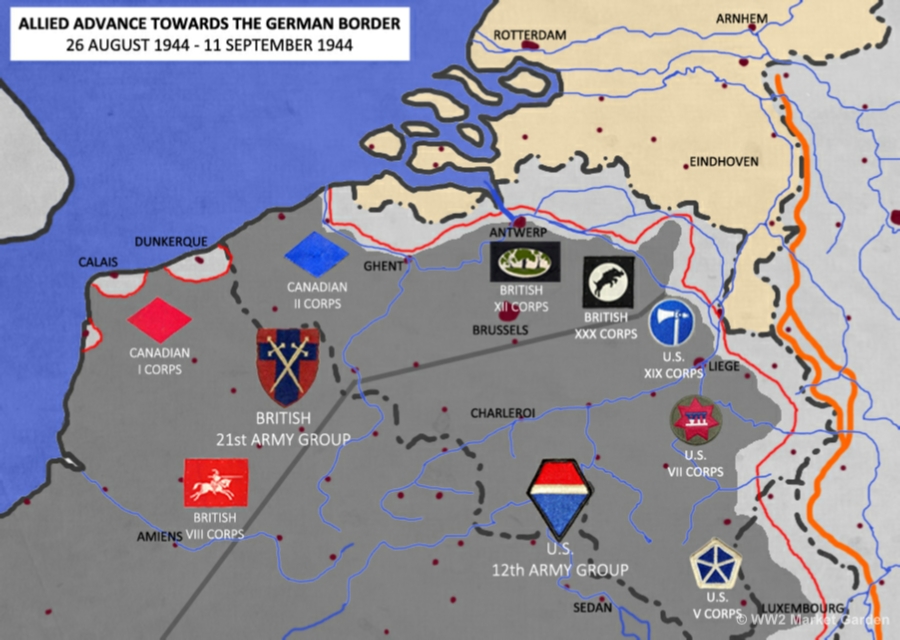