Pfc Eugene ‘Gene’ Gilbreath was born as Eugene Elbert Gilbreath on October 13 1925 in Atlanta Missouri. He grew up on a farm in the Ozarks of Missouri in a family of four. His parents, brother Gerald and himself. He was a happy kid, although the United States suffered from the great depression. Fishing and hunting were his favorite pastime activities. Eugene went to elementary school in a one-room school house. After elementary school  he attended high school and graduated at 16 in 1942. After highschool he worked as a timekeeper for Swift & Co. company in Kansas City, just prior to military service. Gene was really motivated to join the army and join the fight, but couldn’t get his parents to agree on joining until his 18th birthday. On his birthday, Gene registered for the draft and volunteered to go immediately. Just eight days later, October 21 1943, Gene was in the army.

Gene reported for active duty November 17 and took basic training in an intelligence and recon company in Camp Blanding, Florida. In mid-February 1944 he volunteered for parachute training and completed jump school on May 6 1944 in Fort Benning, Georgia. After a 14-day leave he received additional training at Fort Benning.

Gene’s parents weren’t exited that their son was leaving for battle soon. Especially when they learned that he became a paratrooper with greater chance of dangerous actions. His father had fought in World War 1 and was seriously wounded during the Saint-Maheil battle.

On January 7 1944, Gene left the USA, together with his buddy Dennis D. Garland, and went overseas, not knowing to which unit he would be attached. Nine days later Gene arrived in England. On July 16, 1944 he was assigned to HQ company, second battalion of the 506th Parachute Infantry Regiment, 101st Airborne Division in Aldbourne, England. Gene was assigned over a month after D-day and eager to join in the fighting in Europe. He remembers two instances where the division was to jump into France, but both operations got called off because the territory was already taken by allied forces. Eventually Gene would make his first combat jump in Son, the Netherlands during operation Market Garden.

During combat Gene was part of an anti-tank platoon. They used the folding stock carbines as a primary weapon and bazooka’s to take out vehicles. On the first day of the operation, Gene stayed in Son and moved to Eindhoven on the 18th. In Eindhoven Gene would meet one of his fears, when Eindhoven got bombed heavily by the Germans in the evening September 19.

Eventually the division would make its way to Veghel to open up the highway. On September 24 just over a hundred men from second battalion moved north from Veghel towards Uden, amongst these men was Gene. Just as they entered Uden, the highway in between Veghel and Uden was cut off by the Germans. Gene stayed in Uden for a couple of days before returning to Veghel. On October 3rd, the division assembled to move out to the Betuwe, an area which the Americans called ‘The island’. Gene left the Netherlands with the division. The division was brought to Mourmelon-le-grand to rest and refit. Gene always had fond memories of the Dutchmen. 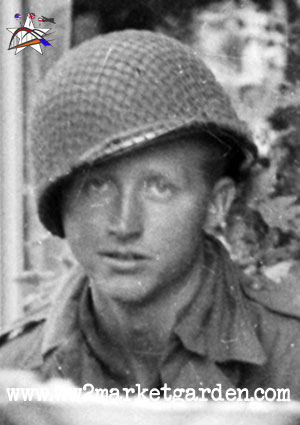 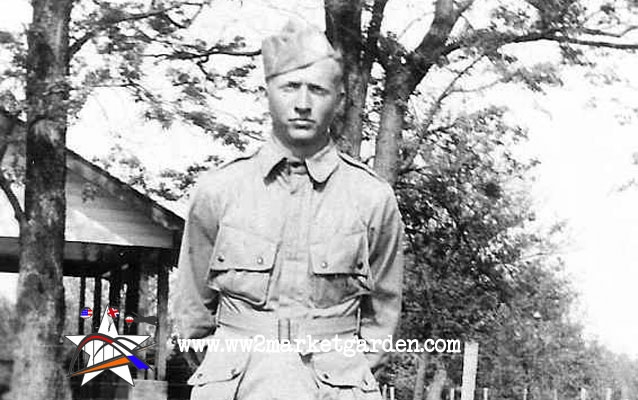 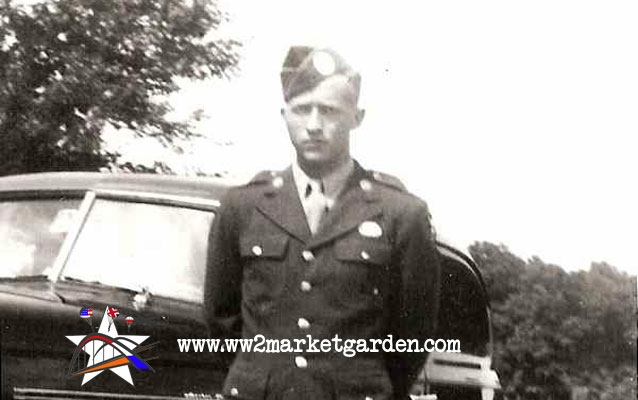 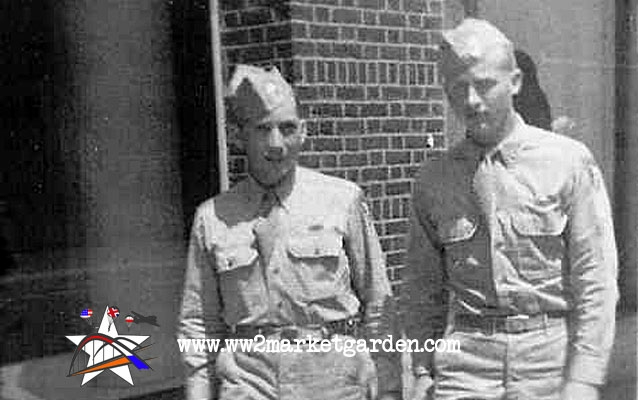 Eugene with his buddy Dennis D. Garland while on leave during their training for the paratroops. Dennis and Eugene were assigned to the same regiment. Dennis died of wounds inflicted during the battle of the Bulge. 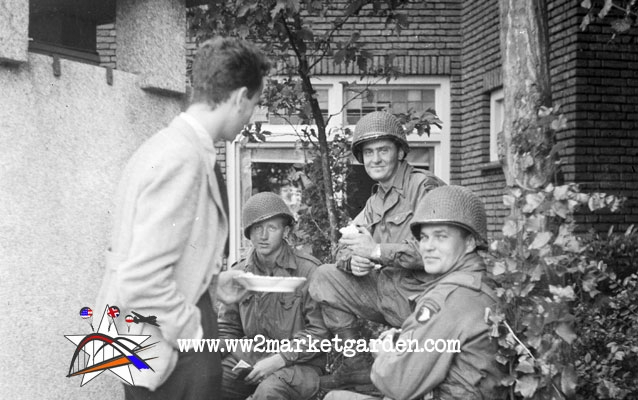 Eugene with his buddies T/5 James S. Lehman and S-Sgt Troy Graham. This photo is taken on September 18 1944 in Eindhoven, the Netherlands when the 506 PIR participated in Operation Market Garden. 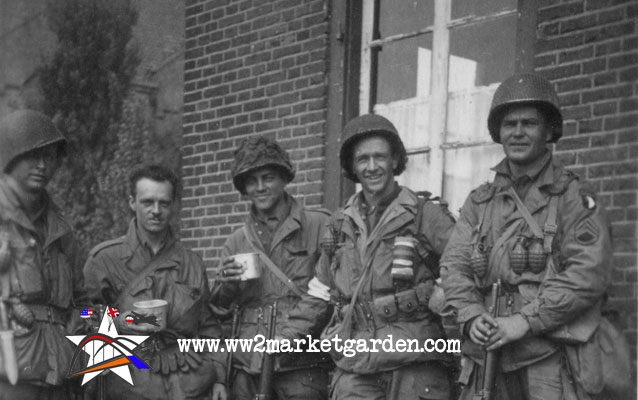 Eugene (left) pictured with his buddies from HQ-2-506 PIR in Eindhoven, the Netherlands during Operation Market Garden.

Suddenly, on December 18, the division was swung into action again in the Belgian Ardennes. The Germans launched a new offensive and the 101st Airborne Division was sent to Bastogne. Bastogne had seven major roads leading in and out of town, this town had to be held by the division. The Germans surrounded the town and tried to take the town again and again, without any result. Gene joined the fighting and survived the siege without a scratch. In mid-January the 101st Airborne Division started its counter offensive against the German army. During the counter offensive, on January 15, Gene got nailed by a sniper with a rifle shot straight to the center of his chest in Noville, Belgium. This happened at about 0830 hours, he recalls:

I heard an extremely loud noise and immediately found myself flat on the street "sucking blood" and realizing I had been shot.  I immediately called for the medics. I repeated the call at least three times but no one came. Upon realizing that no one was coming I somehow got my Thompson machine gun over my right shoulder and holding my left arm at the elbow managed to get to my feet and limped back approximately 65 yards to where my squad was located.  A medic gave me a shot of morphine and my squad leader proceeded to help me start walking to the Battalion Aid Station about a mile away. The last 100 feet, I became so weak from loss of blood and shock I could not walk on my own.  The medic basically had to carry me and put me on a jeep.

After help at the battalion’s aid station Gene was placed on a gurney and put on a jeep. The jeep left for a different hospital. During the trip Gene lost consciousness.

I awakened 13 hours later in a field hospital in Luxembourg.  I was transferred to a hospital in Paris then to England for transfer back to the United States. The injuries were primarily a broken collar bone, broken left arm, slight injury to my left lung and serious injury to my ulnar and radial nerves in the left arm. After spending time at Kennedy General Hospital in Memphis, Tennessee, from April to late July, I was sent to Daytona Beach, Florida for convalescence. Here I was discharged from the army, which happened on September 17, 1945, almost two years after entering service.   After discharge I entered Southwest Missouri State College in February 1946 and graduated February 1949 with a Bachelor of Science in Marketing and Advertising.

In early March 1945 I started working for GMAC (General Motors Acceptance Corporation) and retired on May 1 1979. Until 1992 my loving wife and I spent considerable time caring for my family farm. Since that time I have spent a considerable time traveling and enjoy playing golf. On October3 2005 my wife  passed away and I continue to do considerable traveling.